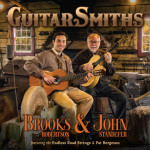 They met in Nashville as performers at the Chet Atkins conference in 2012. Even though there is a 40 year difference in their ages, these two play together like “one brain operating four hands”!

After the Nashville meeting, they began collaborating on guitar arrangements at home and soon formed the guitar duo ‘Brooks & John’. Their first CD, ‘We Came To Play’ was recorded at Nettleingham Audio and was awarded ‘Recording of the Year’ by the National Thumbpickers Hall of Fame.

Now Brooks & John are releasing their second CD, ‘GuitarSmiths’, which covers a wide variety of musical genres and features a string section as well as famed Nashville artist Pat Bergeson on harmonica. Songs range from country to classical to jazz to pop to bossa nova – and all the arrangements are both technically astounding and beautiful to the ear. Check them out!