Notes from the Studio

Thundering taiko drums, dueling bamboo flute and violin, and a powerful groove that puts most rock-and-roll bands to shame - this is Portland Taiko's Big Bang.

Big Bang’s title refers to the sound of the taiko (Japanese drum), and to the power of creativity fused with contemporary Asian American expression. The CD features that unmistakable sound of the big drum, but also polyrhythm, melody and space. Big Bang, the group’s second recording, fuses old and new – tradition and innovation. The works on the album are inspired by traditional Japanese music, but also draw on contemporary American music forms like jazz, R&B, hip-hop, and rock. The combination is an infectious blend of folk sounds and modern musical sensibilities. The energy on the album flows from the huge, driving rhythms of Ha! to the sweet flute melodies of Soliloquy and back again to the raucous, funky finale, Resonance. The recording’s ten tracks total fifty-nine minutes of gripping music. The recording process of Big Bang paid special attention to capturing the incredible natural sound of Portland Taiko’s big drums (the largest drum measures six feet long and over four-and-a-half feet wide). These drums don’t fit into most recording studios, and their long sound wave lengths cannot “open up” in small rooms. So this recording took place at a large acoustic hall. The result, after excellent engineering and mastering, is a beautiful, warm taiko sound. Big Bang follows on the success of Portland Taiko’s first recording, Making Waves, which spent several weeks at number one on The Oregonian’s local bands sales ranking and is currently in its 3rd pressing. Music critic James McQuillen wrote, “Some of the tracks hew close to the traditional Japanese sound; others incorporate melodic and rhythmic material that the festival drummers of old Japan could never have imagined. The high energy is infectious throughout: If you can listen to the whole disc sitting down, check your pulse”. 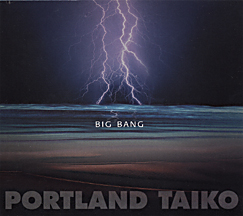 Mastered releases for PDX bands Ruby Red, Chez Stadium, Diggabone and Triclops. The North Carolina Label, Deep Elm Records had two of their bands CDs in for mastering: Lock and Key and Burns Out Bright. Producer Terry Robb dropped off a new disc by Marian Bowman for sweetening. Recording engineer Cory Knowland brought in three projects, the rock band Faded, The Willamette University Chamber Choir and the gospel trio For Eternity. Tracking continues for Tim Current and The Martindales. Portions of this month’s news were published in the “Coast to Coast – Session & Studio News” section of the December 2003 issue of Mix Magazine.