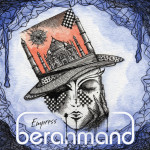 With the abundance of music and everyone using the latest app to make songs on their laptop, it seems so long ago music lovers poured their every thing into living out the mystery in an album or its artist.

The ownership one could feel was next to none. It was as though our theme for what influenced us in all we did would be held in the hands of our musical heroes. They would become our leaders and background music for our memories through our journeys in life. Unfortunately with music currently just as easily dismissed as it is accessed, one is only left to wonder, where are the artists?

Well I present to you, Berahmand, and his first solo album entitled “Empress”. As a one man studio project originating in the city of Portland Oregon in fall of 2013, Berahmand has found the perfect balance of timeless and fresh. His sound is a game changer for music and how we have been currently hearing it. Compiled in his personalized studio, which houses a collection of old classic recording gear and instruments, he has set the bar high for a self written, performed, and produced album. All this was surprisingly recorded without the use of one single computer or extensive editing programs. His branded vibey style really shines as he weaves old beat machines with 70’s rock drums, rock and roll disco inspired guitar, and delivers solid danceable bass lines with crazy warm synth layers. His voice ventures in range from smooth falsettos to gritty soul while maintaining a precise conviction for true pop melodies that we all understand and feel.

Inspired by the likes of timeless legends, he confidently fuses Rock & Roll, New Wave, and Neo Soul into a powerful blend of inspiring dance music and timeless anthems. Berahmand had a vision and he committed to it right down to the last detail. It all started with an alter persona that reflected art-rock in a true showmanship style. With a strong motive in his view, Berahmand suited up to project one thing on to this world, optimism.

When asked about his inspiration to go this direction he states.

“It’s a way to remain anonymous to what I’m about to reveal, which is music to the public. I have a strong purpose in this album and the world can be unforgiving to the optimists of our world.. At the end of my day I want to shed that thick tore up skin. Plus it’s just more interesting to me, and I’m up for the challenge. My goal is to release this album completely independent come October 2014, and hit the music world hard with a purpose!”