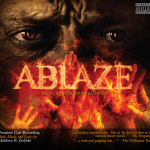 Winner of 7 major Pacific Northwest Theater Awards, including Best Original Musical, Ablaze: an a cappella musical thriller is one of the most unique musicals to hit the stage in decades. Using only soloists, a vocal orchestra, and hand percussion, the score has been heralded by critics as “complex, intelligent ”, “extraordinarily ambitious”, and “one of the best out there in the theater world”.

What also makes this musical so special is its origins in public schools. This deeply emotional and psychological story of eight teenagers trapped in a pit by a psychopath began as a nonmusical play at Lincoln High School in Portland, OR in 2004. Then in 2011, it was adapted into a musical for the neighboring Wilson High School. The entire endeavor was meant to provide young performers with challenging and exciting material – and also to explore content that is relevant to them. The high school musical version was so successful it was picked up for a professional production by Staged! and rewritten yet again, landing on the version for this recording. The show performed to huge acclaim in May, 2013 at Brunish Theatre, also in Portland.

Playing like a fever dream, composer Matthew B. Zrebski’s passion for radically different musical genres is ever present. The music weaves in and out of various styles – gothic horror, R&B, folk, opera, and pop – all with rich harmonies and tribal rhythms. The entire award winning cast performs the album. And as co-produced by Brandon Woods, this Premiere Cast Recording offers every single word and sound effect in the stage production, flowing seamlessly from track to track…as though the listener is right there in the theatre.