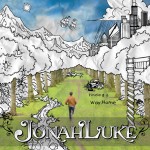 His first full-length album is Finding a Way Home, produced by Peter Rodocker and mastered at Nettleingham Audio. The album is a celebration as well as a remembrance of childhood and joyful times. It transitions between tunes that make you tap your feet and sing along, to steady rock songs, to horn sections and accordion solos that add funk and texture to Jonah’s playful songwriting.

Music has been the bedrock of Jonah’s life since early childhood. Growing up on Chicago’s North Side, Jonah grew up on a diet of funk, Cajun, and Paul Simon’s Graceland played on repeat. As a child he learned to sing as well as play drums, guitar, piano, and trombone. Jonah started playing drums in a Cajun Zydeco band at age 11, and soon followed that with stints in several rock bands, an a cappella group, and a trombone choir.

Jonah relocated to Portland to attend Lewis & Clark College, where after graduation he put down musical roots. He can now be found playing live throughout the Northwest both solo and with vocalist Annie Fassler.