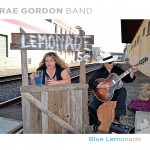 Rae Gordon, who was named Cascade Blues Association’s Best Female Vocalist 2011, started her singing career in the piano bars of Los Angeles and opening up for comedians.

Her early experience singing in the comedy clubs on Sunset Strip gave her an approachability and sense of humor that she brings to audiences today.

Their much awaited recent CD release of original tunes, was co-written and produced by RGB guitar player Gaddis Cavenah titled “Blue Lemonade” and mastered at Nettleingham Audio. It is has received airplay on both KMHD and KINK radio Portland and has crossed the pond to the radio listeners of England. Rae Gordon Band performances are not only a show, but a celebration, as Gordon follows the policy that a stranger is just a friend you haven’t met.