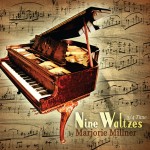 Marjorie Millner’s new album, completed in February 2013, was inspired by her experiences playing piano for English Country Dances in Portland, Oregon every month or so over the past several years.

Every English Country Dance evening includes two waltzes of the band’s choosing. This was the ideal opportunity for Marjorie to challenge herself to try to write a new waltz for each gig, knowing that she could have people dancing to her music within hours, sometimes, of the piece being completed. She didn’t always succeed in writing something new for each gig, but 2012 in particular was a productive year, as indicated by the composition dates in the liner notes.

Marjorie writes in time signatures other than 3/4 time, of course, and has recorded songs and other types of compositions in previous recordings, but this time she wanted to record an album to which people can dance straight through. So here is her new project, continuing a waltz tradition begun over 250 years ago, but including as its final track a Neo-Waltz, the newest waltz development in London dance clubs.

She has included PDF files of all the tunes on the CD, since this album is aimed not just at waltzers but also at English Country Dance and Contradance musicians, who are always looking for new waltzes to play.