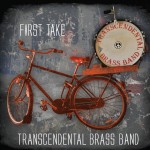 The 9 song recording was tracked, mixed and mastered at Nettlingham Audio in April and June of 2012. The TBB mix it up with their soulful trademark “Freestyle Street Funk” with tunes like the New Orleans classic “Bourbon Street Parade” all the way over to the Afro Pop of the Daktari’s, John Scofield, Stanton Moore, Bob Dylan to the arena rocking “160 Million Dollar Chinese Man”.

The title “First Take” says it all about this project as it was a studio “sit down” affair recorded without a click track and few overdubs. Rhythm tracks and solos were played together on the first take to capture the feeling of a Live TBB performance. The studio – sit down environment gives the band a chance to stretch out with full guitar set up and drum kit, along with clarinet, the result is a funky and cohesive presentation of the bands musicianship, versatility and butt shaking grooves. It’s modern. It’s old school. It’s freestyle. Shake it and dance and your ears will feel happy with “Horn filled Goodness.” A bit of NOLA meets FELA, Jimi and Roland Kirk, “in the Tradition ”