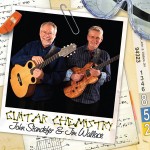 After a 30-year friendship, these two “pickin’ buddies” have finally done it! They have chronicled the magic that happens when they get together on a marvelous new CD full of great tunes.

The musical styles represented and the types of guitars used covers the gamut, creating a totally engaging listening experience. You’ll hear stuff you’ve never heard come out of John’s playing, while getting introduced to his friend Jim Wallace in the process.

In this CD outing John veers off the beaten path by collaborating with his good friend Jim Wallace. The chemistry that occurs when two accomplished guitarists combine forces is, first of all, exciting. It’s also unpredictable. No matter what the concept was in the beginning, the music will take on a life of its own. This CD doesn’t sound at all like the typical John Standefer album. And it’s not like a John Standefer album + Jim Wallace either. It is truly a collaboration between the two players where both guitarists adjust their style – and the sum is greater than the parts.

The song list contains a wide array of musical styles and the guitars used and tunings involved are extensive. This CD is a culmination of over 30 years of ‘guitar fellowship’ and several years of recording tunes here and there until a good collection came together that represents the magic that occurs when these two get together. The arrangements are all unique and cool to listen to. John and Jim are looking forward to sharing their ‘guitar chemistry’ with you and hope that you get a kick out of the fusion.