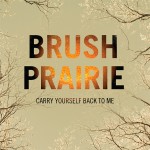 Brush Prairie formed in 2009 when Zia McCabe (also in The Dandy Warhols) decided she wanted to learn to sing, and country singing came most natural.

Zia and Kirk Delong started Brush Prairie as a duo but soon added Christa Buckland to sing harmonies, the band has been through many changes since then and has grown to a seven piece including a mandolin/banjo player and great talents from other NW bands including The Shivas, The SexyWaterSpiders and Donovan Breakwater. Brush Prairie is heavily inspired by the classic/vintage country sounds of Patsy Cline, Hank Williams, Willie Nelson, etc…

A lucky break came when an author had a release with Amazon.com that needed a country song to go with it. Brush Prairie was selected as the band to write/record the song and shoot a video to coincide with the release of the book titled Carry Yourself Back To Me by Deborah Reed. Now Brush Prairie has a song and EP of the same name.