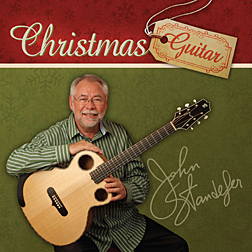 Winner of the 2002 National Fingerstyle Guitar Contest and open division winner of the 2004 International Home of the Legends Competition, John Standefer is a true master of fingerstyle guitar.

He began playing the guitar in 1963, soon learning the Chet Atkins style by ear as well as studying music in a conservatory. Over his life John has traveled throughout the U.S. and abroad performing concerts and teaching master classes. John currently performs and teaches yearly at such events as the Chet Atkins Convention in Nashville and the Christian Musician Summit in Seattle. He has also performed and/or recorded with many other guitar greats as well and writes regularly for Fingerstyle Guitar and Christian Musician magazines. Recently John was inducted into the Clark County Hall of Fame in Vancouver, Washington where he now resides. Recently John was honored by guitar maker Dave Bertoncini, who incorporated John’s ideas into the development of the new ‘John Standefer Signature Model’ Bertoncini guitar. The exceptional guitar music of John Standefer is enthusiastically received in both secular and Christian settings worldwide.