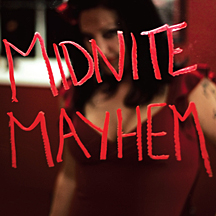 When it’s getting late and you’ve still got things to do. When your ears are tired of the same old song. When your fingers need to curl into a fist and punch some air. Let Midnite Mayhem be the soundtrack for all your shenanigans.

Midnite Mayhem dabbles in many musical genres. It’s a cornucopia of pop, punk, metal, and a little jazz all while having a back bone of hard rock. Midnite Mayhem has been around since ’08 and the snowball has gathered enough songs to put forth their debut album. Hailing from the ‘City of Roses’ it’s time the Portland music scene gets some more thorns in it, that’s where Midnite Mayhem comes in. Julia’s voice will be the siren’s song that will leave you wanting more. Jack’s guitars will tangle your senses in a flurry of blistering notes. Brady’s bass will grind like an earthquake that you can dance to. George’s drums will pound your chest with a beat to wake the dead. Midnite Mayhem are album virgins until now, won’t you take a listen and pop their cherry?