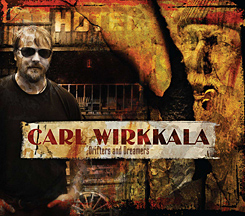 Drifters and Dreamers, thirteen new songs that capture Carl Wirkkala, the Northwest songwriter at his best.

Songs of faith, struggle, hope and loss are brought to the listener straight from the heart and pen of the writer. An excellent cast of musicians include Dave Captein on upright bass, Don Lawry on drums, Lucas Holmgren on guitars and keys, Tim Current on backup vocals, as well as Kevin Nettleingham on guitar and Gus Berry on drums, guitar and keys. Most of these tracks are the result of Wirkkala’s time spent writing during the winter months in early 2009. Two of the tracks are written by executive producer and songwriter Nels Niemela. Songs such as Goodbye Comin’ and Just Passing Through are sure to quickly be written on the heart of the listener. This is a record of many layers which are revealed more with each listen.