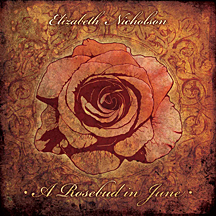 Known for her gutsy, dynamic approach to harp performance, Elizabeth Nicholson is counted among America’s foremost interpreters of traditional Irish dance music for harp — a genre whose lightning-paced tempos and complex ornamentation more typically reserve it for melody instruments such as the fiddle or flute.

Also recognized as a vocalist who sings beautifully…her singing is delicate and pure without being over-precious,(David Kidman, netrhythms.uk, October 2006), Elizabeth’s possesses an elegant command of traditional song — from the filigreed ornamentation of Irish ballads to the strident tones of Americana. Her work has received critical accolades from most major folk music magazine and been featured on NPR’s the “Thistle and Shamrock,” the iconic syndicated folk program “The Midnight Special” (WFMT Chicago), and hundreds of other radio broadcasts worldwide. In “A Rosebud in June” Elizabeth performs a soulful collection of traditional material from Ireland, Scotland and England, pared down to just harp and vocals. Songs range from favorites, such as the The Water is Wide, to the more obscure, such as the Scottish supernational ballad A Strange Knight’s Courting — which recounts the proverbial tale of what happens when the devil comes calling. The album also features nimbly-executed traditional Irish jigs and reels, and a contemplative Scottish slow-air. There are songs about spring, fall, winter, love, sex, death and everything that happens in between; old songs with timeless themes.