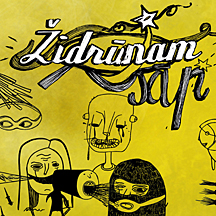 Recorded during the Indian summer of 2007, snowed in over the long winter, Zidruns album Zidrunam sap (Zidruns hurts) is out for the pleasure of wider audiences. The album contains 9 songs. A simple calculation indicates that 88.89% of the record is vocally instrumental with poetry by the band’s in-house author incognito Zidruns. The music and poetry is a result of a search in the uncertain and ambiguous perception and future ideals of a young man. The story of the album is about how the young man hurts knowing that the community attempts to suck him dry, but for now, he lacks the power to break out of it and to leave for the nature. The album was recorded in Hodila Rec. in Latvia, with the help of Girts Laumanis and Arturs Skujin, and was mastered by Kevin Nettleingham. The visual and physical cover of Zidrunam sap was created by the artists Maija Kursceva and Elina Belija. Zidrunam sap is released under the independent Skyr Records of France.