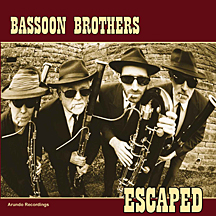 Described as a magical mystery tour for bassoons, Escaped is the third in a series of CDs that feature deranged stolen goods from all periods of music by the Bassoon Brothers and their sole sister.

Why do we play Misirlou on amplified wah-wah bassoon. Because we can, just as we can play music from the classical composers, swing, jazz, pop and rock. Our mission is to show what a bassoon can do in all styles of music. Our previous quartet CDs, Wanted and Captured were edited and mastered at Nettleingham Audio which helped lead to the CDs success. These recordings became the top sellers of all solo and ensemble bassoon CD recordings on amazon.com Thanks to Kevin and Shelly Nettleingham our first “indie release” Escaped was done with ease and yet with great attention to detail. What do you get when you cross an onion with a bassoon? Music that brings tears to your eyes. Some of our music is done with tongue in cheek but the Bassoon Brothers play with refinement that we’ve learned from years as classical musicians affiliated with the Oregon Symphony (whose broadcasts have also been mastered at Nettleingham Audio). We have shown how versatile the bundle of sticks, or belching bedposts can be. In case you were wondering that’s what some call the bassoon. We’re also the clown of the orchestra and sometimes called an ill wind that no one blows good. So what if we get little respect for this Rodney Dangerfield instrument. We are out to have fun. To learn more about the Bassoon Brothers mission, player bios, bassoon trivia, educational materials and why everyone should take up the bassoon, visit the Bassoon Brothers website today!