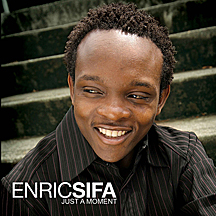 Rwandan born Enric Sifa sings deeply transparent expressions of his faith. As a former street youth and orphan of the 1994 genocide in Rwanda, his songs shine a light of hope that God can rescue any one from the most hopeless situation.

At 14 years old, during a dark time of suffering with no hope and direction, Enric found the love of God in small village church in Rwanda. At that young age, Enric committed himself to a lifelong commission of singing to the world about how God rescued him. Now at the age of 21, Enric has composed more than 60 songs and has been featured on Rwanda TV and radio. He has publicly told his story and sang on many occasions to high ranking leaders of his government, and toured twice in the United States with the music group Hindurwa, a music ministry of Africa New Life Ministries. His musical styles include traditional African vocals, soulful worship ballads, and fun hip-hop grooves, with a Brazilian element. Visit www.enricsifa.com to connect with Enric and learn more about his story or to purchase his first solo CD, Just a Moment, released in December 2007. The music group Hindurwa will tour again in the United States between March and July of 2008. Check www.Hindurwa.com for tour schedules and www.africanewlife.org