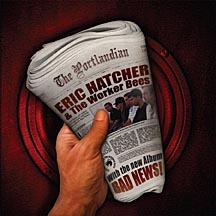 In 2005, four veteran blues players set out to re-energize the Northwest blues scene. Eric Hatcher & The Worker Bees play with energy and talent reminiscent of the Butterfield and Bloomfield bands of the 1960s, yet with the deep soulful emotion of traditional Delta, Memphis, and Chicago bluesmen.

Most folks respectfully walk past the local graveyard; Eric Hatcher & The Worker Bees taunt the dead and the living with their freight-train-like delivery of traditional and original hip-shaking blues. Stirring vocalist Eric Hatcher [guitars, slide guitar, vocals] leads the band. Over the past decade, he has justified his reputation in Portland as a leading blues player with uniquely phrased, punchy and pyrotechnic guitar work. Portland native Larry Oxley [harmonica, vocals] is a major force on blues harp, crossing between the bark of a big band horn section and the haunt of a wailing widow. Larry’s rousing stage energy brings audiences to their feet in cheers and tears. Cody Christopherson [drums, percussion] is a dynamic craftsman and master timekeeper, hailing from The Dalles. Cody is a versatile, respected player in Northwest circles, and key to the appeal of the band. New England native Rick Mazzotta [bass] is relatively new to Portland and rounds out the founding lineup. Rick is a veteran player and session man dedicated to the blues. In late 2006, Mario Carboni [piano, organ] joined the hive. Mario is a Portland native who plays in a distinctive and fiery New Orleans and Memphis style. Goodness, gracious!