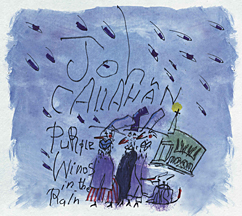 John Callahan is a cartoonist noted for dealing with macabre subjects or physical disabilities, maiming and dismemberment. Rendered quadriplegic by an automobile accident, Callahan draws his cartoons by clutching a pen between both hands. His artistic style is simplistic and often rough, though still legible and humorous, It has been likened to that of William Steig, James Thurber and Ben Wicks.

Callahan’s cartoons deal with subjects often considered taboo. His black humor may be exemplified by the title of his “quasi-memoire”, Will the Real John Callahan Please Stand Up? The subject matter and treatment of his cartoons shares something with the work of Charles Addams and Gaham Wilson although it is much more aggressively and brutally shocking and twisted than even the Playboy cartoons of these cartoonists. Two animated cartoons have been based on Callahan’s cartoons, the first being Pelswick, a “For Children” show done by Nickelodeon, and the second being Quads, a Canadian-Australian co-production. Callahan’s autobiography Don’t worry, he won’t get far on foot” got him an appearance on 60 Minutes and the cover of The New York Times Sunday Magazine. He also has the distinction of being the only cartoonist mentioned in the O.J. Simpson trial. He has been seen most recently on the Dave Attell show, “Insomniac” on Comedy Central. Callhan is also a song-writer with his first CD now available via CD Baby The London Independent calls his songs “Beautiful, but dark…”. He writes all the music and lyrics himself and is backed up by many notable musicians. A Dutch film crew recorded the studio sessions in which Callahan plays a simplified piano version of “Roll Away The Day”. The album was produced by blues legend Terry Robb, with a special cameo apperance by Tom Waits.