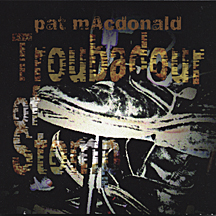 A departure from the last three records produced by John Parrish, Pat Kerns (Exploding Hearts, Nice Boys) stepped up to produce this record adding the elemental presence required to harness Troubadour of Stomp and mAcdonald’s evolution surrounding his time spent writing in Portland. There is a raunchy psychedelia in this recording that has not been as prevalent in other pat mAcdonald albums. Recorded at Studio 13 in Portland, Oregon.