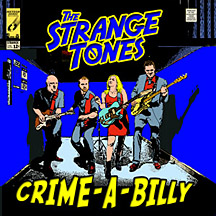 CRIME-A-BILLY has erupted from the great Pacific Northwest! Masterminded and recorded in an undisclosed secure location by THE STRANGE TONES, this new and original CD is a highly combustible set of tunes loaded with explosive playing and crafty songwriting.

“I’m in the cult man, I’m in the cult! Guitar Julie tells me when I drink the Kool-Aid!!! I’ve got eyes as big as pie plates behind this CD!” Thayrone-X Host of The Bone Conduction Music Show WAAM 1600 Ann Arbor, MI Crime-A-Billy expertly captures the distinct and dynamic sound that has put the Strange Tones on the musical most wanted list. The band’s signature sound is created by combining the primal elements of blues, swamp, rock-a-billy and surf music, and stamping it with the Strange Tones specialty of raw, yet tightly worked out songs and high energy performances. Complimenting the Strange Tones on this 14 song CD are a special guest appearance by legendary harmonica player Paul deLay and some haunting Hammond organ by Mike Walker. The result is: “…the CD kicks totally kicks it!!! …what a recording…great lyrics, sound and most important, attitude!!!” -Steve Pringle, KMHD Friday Freeway Blues, Portland, Oregon THE STRANGE TONES are a four piece band residing under (or near) a volcano in the Pacific Northwest. The group has been together about five years, but the players have a long history of performing together in other bands, and with many other well known musicians, such as Screamin’ Jay Hawkins, Pinetop Perkins, Jimmy Rogers, and Guitar Shorty. There’s Guitar Julie with her maniacal guitar playing and gritty vocals; Suburban Slim with his searing solos and soulful singing; multitalented Andy Strange laying down bass, vocals, and harmonica; and J.D. Huge feverishly pounding the kit, propelling the Tones onward.