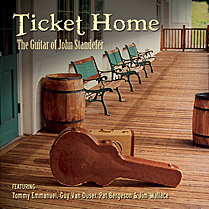 Travel back in time with champion finger-style guitarist John Standefer as he revisits his early years, rekindling the spark that inspired him to spend a lifetime playing guitar.

Coming from musical parents, John first carried on the family tradition by playing mandolin and fiddle. During the ‘folk’ era of the early 60’s, he began finger-picking a guitar along with Peter, Paul and Mary. Then he discovered the genius of Chet Atkins. Chet’s magical way of arranging an entire orchestration for solo guitar fueled John to become one of the finest fingerstyle guitarists in the world today. Join John Standefer and friends: Jim Wallace, Craig Russell, Tommy Emmanuel, Pat Bergeson and Guy Van Duser as they shares the beauty and essence of the music that started it all.