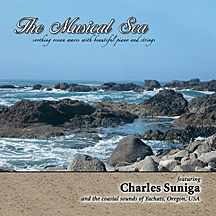 The Musical Sea Featuring Charles Suniga is the first release of the Musical Sea series. The ocean sounds on this cd were recorded in Yachats (pronounced YAH-hots), Oregon. Yachats is a Chinook Indian word, meaning dark water at the foot of the mountain, and the area is among Oregon’s most scenic, featuring majestic rock formations, agate covered beaches, and abundant sea life, including sea lions, puffins and gray whales.

Charles, who has enjoyed great success with his Moments of Peace catalog, has spent many years on the Oregon coast, is a natural choice for this project. The sound of powerful waves crashing against the craggy remnants of ancient mountains is the perfect backdrop for Charles’s free-flowing piano and string sounds. The music seems to dance among the waves, creating interplay of sound that soothes both mind and body.