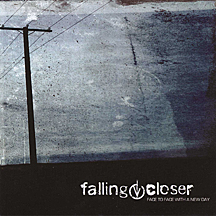 No definition has been created to describe the sound of Falling Closer. Music that doesn’t fit any one genre, but takes pieces from many. Six from Sinematik Industriez said it best “…making mean and pretty music while dodging the trendy or ‘popular’ stigmas of who they sound like.” Falling Closer’s debut release Face To Face With A New Day is exactly that, mean and pretty. The mix of note bending melodies with tasteful screaming has set them apart from everyone else in the Portland music scene.

Jon Johnson/guitar, Brenton Calvin/bass, and Bon McBee/drums have been playing as a band for 7 years now, since early in high school. They went through many singers until meeting up with Chris Huaraqe in March of 2004. What started out as just a side project and jamming in a basement, later turned into a local powerhouse. They offer a blend of music that is rare. Since playing their first show together in April 2004, they have played with national acts such as 36 Crazyfists (Roadrunner Records) and Nural (Hopeless Records). Work on Face To Face With A New Day began in September with recording by Jared Knowland at The Bat Cave in Salem, Oregon. Soon followed mixing with his father Cory Knowland at The Family Room. The album finished up with mastering by Kevin Nettleingham at Nettleingham Audio. When witnessing the band for the first time, Robin Steeley of Crave Magazine said, “Falling Closer tore the house down, with their brand of hard edged music full of hook laden choruses and powerful vocals. The music has many melodic elements and a heavy dynamic feel throughout every song. Instrumentation is solid, and the highlight is an incredible range and delivery by their frontman.” This music is not made, it is born.