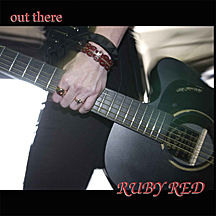 “It’s all been done before,” someone once told singer-songwriter Robin Brantley, front-woman for the Portland pop/rock band Ruby Red. “Maybe,” she adds, “so why do we always want more?”

It’s simple: Music is the soundtrack of our lives! It’s with music that we celebrate our highs, wallow in our lows & everything in between. So what makes a song truly great? “For me,” Robin replies, “the many layers of music are what make it interesting. But what makes a song great has to do with more than that. Sometimes it’s that ring of distant familiarity- like seeing a stranger that reminds you of an old friend- it draws you in. Then you realize this could be a brand new friend; it moves you right along. And the next thing you know you’re “hooked!”- coming back again and again for more…” It is that infectious “hook” that stands out in every Ruby Red song. But there are many surprises too- like harmonicas and harpsichords, even some Latin-inspired percussion. Supported with a steady dose of creative instrumentation & innovative harmonies, the band’s first album “Out There” is scheduled for release in mid-October 2004 on their own label Red Bird Records, Inc.. The album was tracked/mixed/mastered at Nettleingham Audio, produced by Kevin Nettleingham & Robin Brantley. 12 tracks take the listener through etherial trips about reality TV & poisoned love to hard rockin’ tunes with wailing guitar solos and vocals that pack a major punch. One listener had this to say about “Out There”: “I put it into my cd player at work and pushed play. Before I realized, the thing was over, and I found myself immediately pushing play again. I listened to the whole thing three times, from beginning to end. I never got tired of it!- only wanted to hear it again, but by then it was time to punch out. Dave (Ruby Red vocalist) wouldn’t let me take it home as it was his only copy. I couldn’t wait to come back to work the next day to hear it again- (and I never feel that way about my job!).  Head on over to rubyredmusic.com for more about show dates, MP3’s and tons of pictures of this amazing new band- you won’t be disappointed!