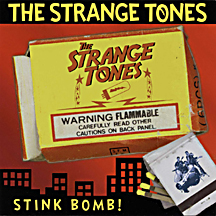 On guitars the Strange Tones feature Guitar Julie and Whit Draper. Raised on a steady diet of Jimmy Reed’s blues and Ike and Tina’s R&B, Guitar Julie’s incendiary solos light up the CD while her soulful vocals leave no doubt that every word she sings has got to be true. Known mostly for his traditional acoustic blues work with the band Back Porch Blues, Whit Draper clearly relishes the electric world of The Strange Tones. From understated blues to surf-a-billy madness his playing always entertains. The big fat groove of The Strange Tones comes from one of the finest rhythm sections working the Northwest. Bass player Andy Strange and drummer J.D. Huge lock in with a driving force that can only come from years of misspent youth playing together in bands. J.D. Huge propels the band with a steady hand, at times with a subtle shuffle, at others swinging like a man possessed. Andy Strange, an alumni of Screamin’ Jay Hawkins’ band, keeps the band firmly anchored in the roots with the deep throb of a Fender bass. Mr. Strange also spices up the mix with some lowdown harmonica, heartfelt vocals, and even a splash of theramin. Recorded at Relentless Recording by Jim Sanders the featured guests on the CD include the legendary Jon Koonce, nationally recognized slide guitar master Henry Cooper, and Hammond B3 heavyweight Mike Walker. NOTABLE QUOTES: “Bluesy, rockin’, raw, gritty, and oh so cool!” – Tom Addis, Host of “Blues Palace” KMHD 89.1 FM Portland, OR USA “The Strange Tones are a fine funky band that plays rockin’ roots music with the fervor of true believers. Their sound is stripped of gratuitous flash because these guys know Jimmy Reed’s secret, that one note is better than a hundred, especially if it’s the perfect one.” – John Foyston, The Oregonian “The best bass man I know” – Screamin’ Jay Hawkins “SIZZLING-SMOKIN’- RAW- ROLLICKIN’ Are the words that best describe the Strange Tones brand of new roots blues. They transform the sounds of the past with their unique interpretations and influences and creative energy. Each performance is like boarding a runaway train which races you on down the tracks taking you on a wild, energetic ride into the future of blues.” – Rowan DeSantis, Positively Entertainment “YEAH!!!!!! Very Nice!” – Bob Anchetta, Host of Sunday Night Blues” KINK 102 FM Portland, OR USA The Strange Tones consistently deliver the groceries on strolls, shuffles and sneaky instrumentals. – John Chandler, Portland Tribune