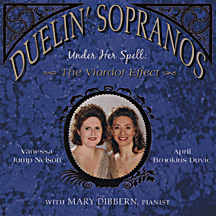 Drawn together by a love of singing, by a soprano’s natural competitive drive, and a yearning desire to perform, Duelin’ Sopranos was formed (in this incarnation) by Vanessa Jump Nelson and April Brookins Duvic in 1996. From their first duet and first performance, the two women knew they had something worth committing their time, energies, and voices to – something bigger than either one of them could do as soloists.

Armed with years of study and experience behind them, not to mention an occasional set of sabres, the two have dueled, both figuratively and literally, their way from Portland, Oregon to Paris, France, often sacrificing their personal dignity, but never sacrificing the music. Living up to the reputation that if one soprano can be “difficult” then two can be nearly impossible, they have sometimes called upon their pianists to referee at rehearsals. Often asked, “Who gets to sing the high notes?” the duo relies on the time-honored system of, “It’s MY turn! You got the high notes on the last song!, as well as an occasional coin toss to decide the fate of those exquisite high notes. Their recent passion has been to pay homage to one of the 19th century’s, if not history’s, greatest female musicians – Pauline Viardot, and they have developed a program centered on Viardot’s music and the music of composers she knew and influenced. Why not take inspiration from Viardot – she was a great diva, (ah, to be great divas!), she was a pianist of well-known repute (the Duelin’ Sopranos have often embarrassed themselves at the piano), she composed both vocal and instrumental music (the Duelin’ Sopranos have been known to de-compose a few pieces of music themselves), she was a great teacher of voice and her techniques still used today, (Duelin’ Sopranos have finely honed vocal techniques, too) and she knew all the guys who were hot (in the musical world at least) of her day. You name them – she knew them! Berlioz, Brahms, Chopin, Delibes, Fauré, Franck, Gounod, Liszt, Massenet, Rossini, Saint-Saëns – all men whose names have become household (well, musical households, to be sure) names, who all owe some measure of gratitude to Viardot for her inspiration, creative nudges, and an occasional good time! When not busy sharing their enthusiasm for 19th century French art songs and duets onstage, the two sopranos try to stay out of trouble by teaching others the great art of singing, masquerading as mild-mannered voice teachers in the Portland/Vancouver area – whose unsuspecting students seldom realize that underneath those calm exteriors lurk the Duelin’ Sopranos!