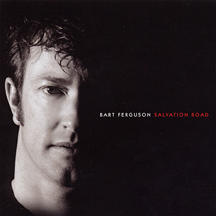 Salvation Road, the debut solo album from Bart Ferguson is the beginning of a new road for this 15-year rock veteran. Featuring the strongest songs Bart has ever written, Salvation Road is a musical history lesson for those who have never known his music. For long-time fans, it’s an amazing collection of some past highlights with a new musical direction.

Comparisons have surfaced ranging from John Mellencamp to Counting Crows, but it’s not just a musical comparison, it’s also very lyrical. “I’ve always written about real people or real situations. Nothing is fiction” Bart says. “All of these things really happened or really became feelings. I’m not invested in fictional songs and I think that’s what makes these songs so important to me.” When you peel back the layers, the words reveal true, sometimes heartbreaking stories. Take “Will You Stay With Me Tonight”, a hooky, upbeat sing-along that remains in your head like a jingle. The music wraps itself around a story based on the 9/11 tragedy. “Not to be irreverent, but I read a story that told how the one-night-stand rate in New York hit an all time high in the days after 9/11. I thought about how people were just trying to find comfort in companionship and how that tragedy hurt the people living right there and the story began to unfold inside of the music I’d written” he says. Another, “Wagon Wheel” tells the true story of Bart taking the long 4-mile walk home in the cold and rain one night after his girlfriend drove away from their evening date. Salvation Road is a road that winds its way through the rock and pop world with relative ease. The lyrics serve as a hint to the deeper meaning and truth behind not only the music and life, but to Bart himself. Bart’s road began as he listened to the Beatles in the early 70’s. Though he loved the songs and sang them around the house, it wasn’t the songs that inspired him as much as the harmonies. It’s the first memory he has of listening to two singers singing at the same time, but singing different melodies. “They taught me how to construct harmonies”, Bart says. I was only about 5 or 6 and I was beginning to compose melodies and choruses based on the Beatles and Mamas & the Papas works.” Though an old acoustic guitar sat in the corner of Bart’s bedroom, he stayed content to work on vocal melodies in his head. It wasn’t until high school that Willie Nelson, Neil Young and Bob Dylan became major influences and got him hooked on the instrument that he would master within a year: the harmonica. “I’d put their records on and play the harmonica parts over and over until I had copied them to the best of my ability.” Bart would then invite his friends over to hear him play the copied parts against the records playing in the background. He laughs, “I had some really good friends, I guess.” The very first time Bart took the stage was at a blues jam at Taylor’s in Eugene. In the crowd that evening was a guitarist named Alan Bush who would invite Bart to jam with him in the near future. The result of that jam session was the creation of two songs, “Headlines Bleeding” and “Call Me Crazy”, songs that would be staples in Bart concerts for years to come. The two also created Bart’s first working band, The Strangers. After recording a cassette, Bart asked a local music store manager if he could leave a few for sale. The manager begrudgingly told Bart to leave 5 cassettes and no expectations. Swift sales and public demand for the cassette had the manager in disbelief as over 100 units left the store in a week. Word spread to Portland and the crowds grew. At this point, the Strangers decided to pack up and move to San Francisco. They added a few members to the band and continued to ride the wave of success that began in the Northwest. Working their way up the ladder, The Strangers grew to playing some of the West’s most famous venues, the Fillmore and the Roseland. It was as though the music industry was waiting for just one thing to strike them between the eyes in regards to the Strangers, but after 9 years of 300 days a year touring, the band finally called it a day. Bart moved back to Portland and co-founded another northwest sensation, Kerosene Dream. Taking their name from an old Stranger’s song, Kerosene Dream grew from an acoustic duo to a five-piece band in 6 years. Crowds were drawn to the band’s performances and again the music industry sniffed around but a record deal never materialized and in the spring of 2002, Bart left the band. Harmonies and melodies continued to bounce through Bart’s head and within a month after the break-up, Bart had enough material for another record, (by now, he had an on-again-off-again relationship with the guitar), but no band to perform the music. At once, what seemed like a daunting enterprise in the early stages of Bart’s career, had become the only option left. Bart held auditions for a back-up band. The result of this exhaustive search netted some of the Northwest’s finest musicians. Now, Bart has put it all together: the music, the sound, the band. Listen to the album or go see one of the shows, but don’t let the road pass you by. This is some of the most exciting music to come out of the northwest in a long time. More information: On Radar (503) 504-2636