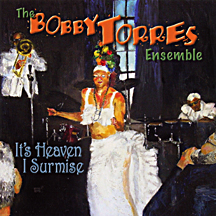 A close look of the movies “Woodstock” or “Mad Dogs & Englishmen” – even a close listen to the Mad Dogs and Englishmen live CD – will reveal Bobby Torres early in his career touring and playing with Joe Cocker. Bobby also toured and played with Al Jarreau, Etta James, The Captain & Tennille, Tom Jones (Europe, Asia & the U.S.) and many others. Though he has established his home in Portland Oregon, he still remains in touch with these friends.

Bobby has fused these professional experiences with his Latin American roots to create the unique sound that characterizes the Bobby Torres Ensemble. On this CD, Bobby has recorded songs by Steve Porcaro, Don Maclean, Cat Stevens, Ivan Lins, Jonatha Brook as well as some of his own songs. Including the title track “It’s Heaven I Surmise”. Bobby has “Latinized” the work of these songwriters. Bobby humorously describes his process: “I draw my work from my Latin roots and my American upbringing in New York. For me, I felt I had the choice to play either Latin lyrics with American rhythms or Latin rhythms with American lyrics. I chose the latter.”