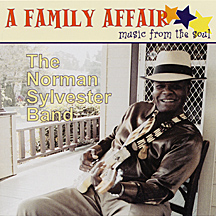 Norman Sylvester’s musical journey started on the front porch of his family’s home in northeast Portland, OR. Norman and his Blues Brother, Isaac Scott, would take two of Norman’s mother’s best dining room chairs and line them up side by side on the huge porch with its beautiful railings. They’d hook up their guitars and amps and jam for the entire neighborhood playing 20-minute versions of Freddie King’s “Hideaway”, followed by 30-minute versions of Booker T & the MG’s “Green Onions”.

In 1965, Isaac moved to Seattle, WA, and Norman started a family in Portland. Their friendship continued for 37 years–they were Brothers in the Groove of Blues. Whenever they’d get together to trade licks, it was an automatic groove. Norman lost his mother, his dad and his friend Isaac Scott, three of the most influential people in his life. But the love of family and friendship is reflected in his original music. A favorite Norman Sylvester quote is, “You got to tell it like is, to get peace of mind.”