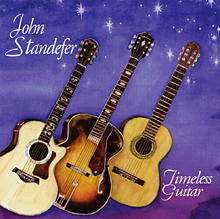 2002 National Fingerstyle Guitar Champion As a solo guitarist, John Standefer has explored many styles of music. In his teens he played folk music and worked out Chet Atkins arrangements from records. He also studied formally in a music conservatory. His interest in jazz and Brazilian music grew during the same time period he was playing pop and rock professionally. Most recently John has been involved in contemporary gospel music. With this huge array of interests, it’s no wonder that his latest CD release is a dazzling display of versatility and style. Recorded simplistically with only guitar and light percussion, these arrangements are indeed ‘timeless guitar’ classics – and it’s hard to believe it’s all done on one guitar with no overdubs!

John Standefer performs concerts and teaches guitar seminars throughout the US and Canada. Besides ‘Timeless Guitar’, John has also produced a number of other CDs, books and videos which can be found on the product page of his website. John also writes for Fingerstyle Guitar and Christian Musician magazines, John August and Mel Bay Publishing, and appears yearly at the Chet Atkins Convention in Tennessee and the Christian Guitarists Conference in California.