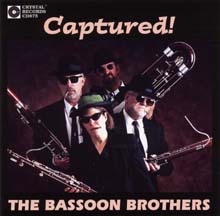 The Bassoon Brothers have been stirring up trouble since they began performing together in 1985. They have stolen material from string quartets, operas, symphonies and popular music, calling it their own with the unmistakable Bassoon Brothers stamp. Their first CD recording, Wanted for Low Down Playing and Bass Behavior on Crystal Records showed many of their musical crimes. They commissioned another known associate felon, a fellow bassoonist, Peter Schickele a.k.a. P.D.Q. Bach, for some hot goods and more rip-offs. Since the release in 1999, the Bros’s CD has been the number-one selling recording of all solo or group bassoon recordings on Amazon.com. The irreverence they demonstrate and theft of material continues with a completed second recording soon to be released and a third recording partially completed.

Due to the serious nature of their crimes, the Bassoon Brothers have spent some time in prisons in Oregon and California. Performing in prisons has become a passion for the group. They have shadowed the Oregon Symphony on northwest tours for years performing their purloined material in schools, and retirement centers and community outreach programs. The Bassoon Brothers pioneered the Symphony’s Bridgeport Brew Pub Chamber Music on Tap with every performance a sell out. The unusual criminal nature of the group caught the attention of the Wall Street Journal where their photo appeared with an article about the bassoons and brew connection, as did another article in the Seattle Times. HBO’s Dennis Miller Show featured a photo of them with the comment that they were the finalists in the Fifth Annual Amsterdam Bong Hit Festival. The same photo was a recent clue on ABC’s Jeopardy show. Answer: “What is a bassoon?” What the bassoon does not have is respect. That’s why the Bassoon Brothers call it the Rodney Dangerfield instrument. Their mission is, first, for the public to quit calling it an oboe and, second, a call for more people to take the instrument seriously. They consider the bassoon to be an endangered instrument for lack of players. In the right hands, the “clown of the orchestra” is capable of great versatility and beauty as well as its role as a “belching bedpost.” In some reviews the Bros have been called role models for younger players, having given them material to enjoy the bassoon just for the fun of it. Through this approach they hope to attract more players to the instrument which is their ultimate mission. As for getting respect, Vivaldi wrote 37 concertos for the bassoon, more than any other instrument except the violin. Unfortunately, it’s been down hill ever since as a solo instrument. The Bassoon Brothers are also known as the bassoon section of the Oregon Symphony. Mark (head de ranger) Eubanks, his side kick is Robert (de Viper) Naglee, Steve (de new guy) Harriswangler, and Juan de Gomar.