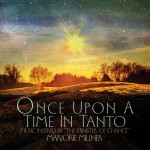 This time around, Marjorie is trying her hand at capturing, in 3/4 time, five characters from a Doctor Who spinoff sonic movie called “The Minister of Chance.”

“The Minister of Chance” was written, directed and produced by Dan Freeman. Clare Eden is the executive producer. It stars Jenny Agutter (Professor Cantha), Lauren Crace (Kitty), Paul Darrow, Tamsin Greig, Peter Guinness, Sylvester McCoy (The Witch Prime), Paul McGann (Durian) and Julian Wadham (The Minister.) The sonic movie is available as a free download from iTunes or from the movie’s website: http://www.ministerofchance.com

The Minister of Chance is a Time Lord, like Doctor Who. The Minister comes to the island nation of Tanto on an alien planet, to investigate why some of the nearby stars have been moved and some have changed color. Thus the adventure begins.

There are 5 tracks on “Once Upon A Time In Tanto,” and they are Marjorie’s interpretations of the characters of The Minister, The Witch Prime, Durian, Professor Cantha, and Kitty. This has been a fun project for Marjorie, inspired by a wonderful creation from the mind of the brilliantly inventive and funny Dan Freeman, who was kind enough to encourage her to try writing some waltzes for some of the characters.

Dan and executive producer Clare have been working overtime to raise the funds to cover the costs of shooting a mini-film of the Prologue. The shoot was in October, 2013, and they are now in post-production. Everything to date has been funded by the fans who love it, and Marjorie will be donating all proceeds of this recording through December 31, 2013 to the project. Within the next few weeks, Dan and Clare will begin seeking investors to turn this award-winning project into a full-length feature film or perhaps a TV mini-series.

Marjorie wrote these tunes as a fan of the series, because characters as unforgettable as these deserve to have music written for them.