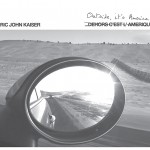 Since the June, 2010, release of his third CD, “Portland Rendez-Vous,” Eric John Kaiser (“Portland’s French Troubadour”) has logged close to 10,000 miles via air, land and sea.

Exploring North America on multiple lengthy tours, the Paris native has gigged his way up through Canada and down through the South, as far as New Orleans and Washington D.C., where he performed as an “Artist in Residence” for the Smithsonian Museum. Sometimes driving his trusty Subaru under the wide Montana sky, sometimes riding the subway under the New York City canyons… Then jetting across the Atlantic to tour through France… His music has logged as many miles and picked up accents from across the American landscape: his latest songs resonate now with a very American rhythm, like bouncing across the vast plains on horseback… some western lap steel guitar… some dirty roadhouse blues… The culmination of this musical evolution is Eric John Kaiser’s latest CD (produced in part thanks to fan-funding through RocketHub.com), “Dehors c’est l’Amerique” (“Outside, It’s America”).

In his travels, Eric John Kaiser has become a kind of booster for the charms of Portland and America in general. He says, “After touring intensively in the US over the last two years, I think that in a way sometimes I am a mirror to people. They’ll ask why I would leave a beautiful and prestigious city like Paris to come to Portland. What makes PDX special? What they mean is, ‘tell us why we are special and why you like it here’! I think in some ways that makes them even more proud to be Americans when they hear praise from a French guy…”