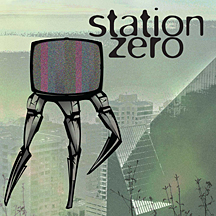 With a firm indie-rock foundation, the self-titled debut CD by Station Zero incorporates the alternative rock sound of the 80s and 90s, straight ahead hard-rock, and the occasional foray into Sci-Fi space-rock to create a unique, driving musical experience.

Station Zero was formed in Portland, Oregon when bassist Wally Hendrickson (Hip Replacements, Rowdy James Band) recruited frontman Rich Milock (Lucky vs. the Bomb) and former Moonshine Hangover drummer Greg Montplaisir to form a three piece. Singer/guitarist Neal Clark, who had previously played with Hendrickson in the Ouijas, was then brought back into the fold to round out the lineup. Although they have only been playing together since 2008, Station Zero has played shows at local clubs such as The White Eagle, Ash Street Saloon, the Tonic Lounge, Twilight Cafe, and the Kenton Club.