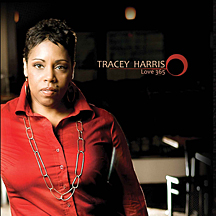 With the release of her sophomore CD, Love 365, on Woodsway Records, Tracey explores the many facets of love and relationships giving her listeners a first hand look into the heart and soul of love.

Born and raised in Portland, Oregon, Tracey began singing solos in her high school choir, vocal jazz ensemble and community choirs. Her first national recording job came in 1986, when she sang background vocals on Grammy nominated artist Najee’s debut recording Najee’s Theme. Tracey later went on to record her first CD Keep On Believin’, a mix of contemporary gospel and inspirational songs on the Pamplin Music label in 1997. In 1998, Tracey was a featured vocalist on the Grammy nominated inspirational/gospel CD Motown Comes Home, a compilation of past, present and future Motown artists. The CD featured Stevie Wonder, The Temptations, Smokey Robinson, and Boyz II Men. Tracey is also a featured vocalist on the spring 2007 release of Pink Martini’s Hey Eugene, and performed the single live at Carnegie Hall and on the David Letterman Show in June of 2007. Tracey says, “Grown Folks” music is what we call the vibe of Love 365. Making a CD that reflects positive messages about love and relationships is something we wanted to focus on. It’s personal for me, because I co-wrote and produced all of the songs with my husband. We love the slow jams, and the old school grooves, and wanted to incorporate those with the new sounds of today&.which equals a vibe of our own. For those searching for sophisticated love songs, Love 365 is exactly what you are looking for&&a great dose of feel good Grown Folks music!