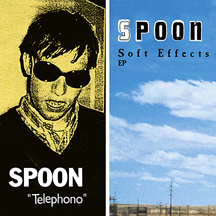 In the spring of 1996, a band out of Austin, TX burst onto the scene with the release of their debut album on venerable NYC-based indie label, Matador Records. That album was Telephono, a jagged yet incredibly melodic collection of taut post-punk fury, and that band was Spoon.

Britt Daniel and Jim Eno formed Spoon in 1994 after the two of them had met playing in several different bands around the Austin scene. Telephono was recorded in Austin with sometime Spoon bass player and full time Reivers / Zeitgeist front man John Croslin. The jagged guitar work and staccato rhythms were reverent nods to The Modern Lovers and Wire, even more so than on their subsequent releases. One thing was obvious from the very start; Spoon was a force to be reckoned with. After touring incessantly in support of Telephono in both North America and Europe, Spoon returned to the studio as a well oiled machine in late 1996, once again recording with John Croslin, and emerged with the stunning Soft Effects EP. As amazing a debut as Telephono was, Soft Effects presented a quantum leap forward, and serves as the original blueprint of the sound that would propel the band to prominence in the coming years. On Soft Effects, Spoon front man Britt Daniel allows himself more room to groove, with rougher edges and a few subtle hints of soul / R&B, while drummer Jim Eno hammers out his trademark back-beat riffs to keep the songs taut, dancing precariously just on the edge of chaos, where all great art is produced. It’s a brilliant musical statement, and to this day one of the band’s favorite recordings. Sadly, for legions of Spoon fans that have discovered the band only recently, through the astounding success on albums such as Gimme Fiction (2005), Kill The Moonlight (2002), and Girls Can Tell (2001), these first two Spoon recordings have been out of print for several years. Now to celebrate 10 years of excellence from Spoon, Merge Records is incredibly proud to reissue Telephono and Soft Effects on July 25th, 2006, bringing the entire Spoon catalog under one roof for the first time.  Telephono / Soft Effects will be reissued as one deluxe title, both CDs are packaged together at one low list price, with beautifully restored original artwork, completely re-mastered tracks and a bonus video for Telephono¹s Not Turning Off included. Celebrate 10 years of Spoon!! Summer 2006!