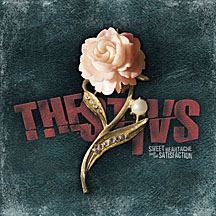 Hailing from the streets of Portland, Oregon, THE STIVS have not only set themselves apart from the local landscape of emo, metalcore and anarcho punk by their infectious blend of rock ‘n roll and punk rock, but they have also made quite a name for themselves as a band whose live performances are nothing short of refreshing, energetic, and poignant.

Forming in the fall of 2001 (from the ashes of the Huntingtons, The Reaction and Denote The Apex,) THE STIVS wasted no time. They immediately started creating what would eventually be an amalgamation of the classic rock ‘n roll/glam sounds of bands like the New York Dolls, Hanoi Rocks, The Stooges and AC/DC with the punk rock ‘n roll sounds of bands like the Ramones and Motorhead. More simply put, in the mind of the average listener, THE STIVS are what it would sound like if Iggy Pop fronted a faster AC/DC. Having just finished their debut full length, “Sweet Heartache And The Satisfaction” (Boot To Head Records), with the world-renowned Jack Endino (Nirvana, Soundgarden, Zeke, Murder City Devils, Black Halos, etc.), THE STIVS are poised to take over the world one ear and one town at a time. This record is nothing short of amazing; from start to finish, it’s pure energy and balls to the wall rock and roll… For those about to be rocked, we salute you!