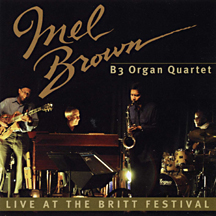 The latter quote came after the great guitarist heard the Mel Brown B-3 Organ Quartet open for him at the Britt Festival in southern Oregon on September 8, 2003. And on this CD, you can hear exactly what Benson was so enthusiastic about. Recorded directly off the mixing board, this CD is simply the 2-track, on-the-fly mix sent to the p.a. speakers that evening. Since no one knew the recording light was on, the band was loose and just letting it all hang out! So in a world of fakes, this CD is the real deal. No overdubs, no edits, no nothing: just a great band playing an uninterrupted set for the enjoyment of a packed house–and, of course, themselves. And “uninterrupted” is the word: as Mel Brown says in his opening remarks, his quartet is different from other groups–they never stop! Instead, they seamlessly segue from one tune to the next. Not many bands could pull off this trick. But the Mel Brown B-3 Organ Quartet is an exceptional group. Each member–Mel Brown on drums, Dan Balmer on guitar, Renato Caranto on sax, and Louis Pain at the Hammond B-3—is outstanding in his own right. Their resumes include everyone from the Motown greats (Mel played with them all) to Joey deFrancesco to Bo Diddley. But more remarkable—and this is what so impressed Benson—this is a real band, not just a collection of talented players. After a six-year run of Thursdays at Jimmy Mak’s in Portland, Oregon, Mel’s quartet has developed a rare combination of tightness and spontaneity. Those qualities–along with some serious funkiness–are beautifully captured on this CD. Listen carefully and catch Benson’s great bassist, Stanley Banks, shouting his approval throughout the set. After hearing this recording, many listeners will no doubt share Stanley’s–and his employer’s enthusiasm.